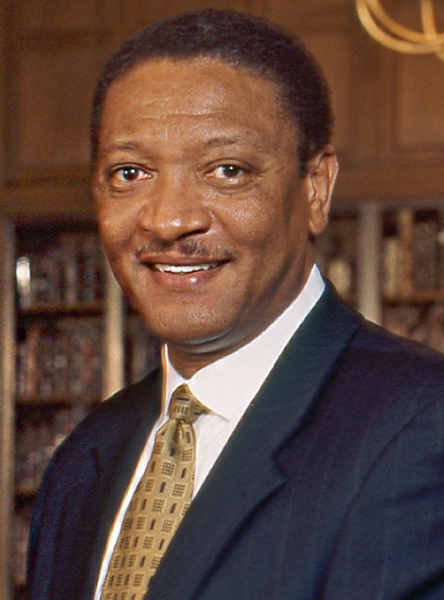 Speed was born and reared in Oxford, N.C. and attended the public schools there. He received his undergraduate degree at North Carolina Central University, and in 1979 he received an MBA degree from Atlanta University where he was named “Most Outstanding Student” in the School of Business.  He joined the international accounting firm of Deloitte & Touche in 1979 and was a Partner Candidate at the time he left to join his client Hardee’s Food Systems, Inc. North Carolina Mutual was also one of his clients.

He joined NC Mutual as a Senior Vice President and Chief Financial Officer in 2002, while the company’s strategic plan was being developed. He helped guide that process, and in April 2003, was named acting President and Chief Executive Officer.  Speed serves on the Board of Directors of North Carolina Mutual Life Insurance Company, Mechanics & Farmers Bank, Nottingham Investment Trust, Investors Title Company, AAA Carolinas, North Carolina Central University School of Business, UNC Healthcare Systems, Communities in Schools of North Carolina and Central Children’s Home of North Carolina. He has served as Vice Chairman of the President’s Council on Efficiency and Effectiveness for the University of North Carolina and on the Governor’s Business Council for Fiscal Reform, as well as on numerous other boards and commissions. Speed is a member of the American Institute of Certified Public Accountants and the National Association of Black Accountants.

North Carolina Mutual Life Insurance Company offers a wide variety of insurance products, including life, accident and health, dental and disability through group plans for both large and small organizations and through individual policies.  Since its founding 112 years ago in Durham, North Carolina Mutual has built a reputation for financial stability and the personalized service it provides its policyholders.  It has policyholders in 24 states and the District of Columbia and more than $8 billion of insurance in force.